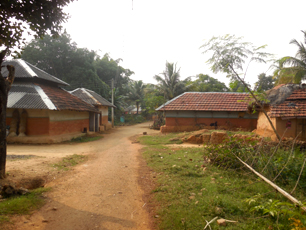 As per archaeological survey, the region existed and was inhabited even in the pre historic times. It was once a part of the kingdom of Malla Dynasty and later the Rajputs from Western India.

Mythologically the forest of Jhargram was the hot spots for "Tantric" activities of the Hindus. The impenetrable, isolated jungles were the ideal place for the sacred Hindu rituals. There were some hermitages in the interiors, there were saints performing "tantra sadhana" or "shakti" worship. Several temples or "Shakti Peethas" were established by the performer of the Shakti rituals for performing the act of tantra sadhana.

Jhargram a subdivision of Midnapur (West) District, studded with Sal, Pial, Shagun, Mahua etc offers an undulating landscape. The region is a dual blend of rolling plateau made up of laterite soil of Gangetic Alluvial Plains, which is highly conducive for cultivation. Hence the economy of the district is mainly agriculture based and about 2,296.05 Sq.Km. of land is cultivated. The dry weather of Jhargram is highly adverse to the agriculture (as except, the monsoon, the dry weather prevails mainly) therefore for irrigation Subarnarekha have been undertaken to induce the agricultural development, which is the backbone of the rural economy. 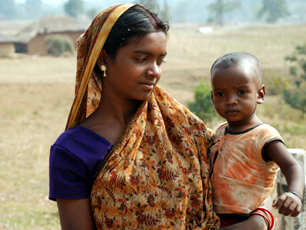 As most of the land is dry and the rivers are only rain fed, the agriculture is supported neither by rain nor by rivers. Hence irrigation is the only way out for this problem, land with irrigation facilities in the year 2001-02 was 2,296.05 sq.km.

Rice is the major crop, and occupies the gross area, it is produced in the alluvial plains which are suitable for retaining waters. Apart from rice, legumes, wheat, corn etc are also produced.

In recent times, the Government has opened up a number of avenues for the expansion of horticulture (e.g. Vegetables, fruits, and flowers, spices, medicinal and aromatic plants) thereby making it an important source of the district's gross income. As Jhargram is not a rich storehouse for minerals, the industries, which have been developed here, are all agricultural or forest based.

Jhargram "the land of red soil", is also quoted as the land of Sal because the land is dominated by thousand acres of Sal forest, the dense forest of this place has got its own panoramic beauty. There were also remnants of the civilization once colonized in the region, adds profound historical importance to the immense worth of the land. The reminisce of the land is due to its extensive Sal forests.

As per the literacy rate of Jhargram is approximately 60.29% which is not at all upto the mark or of fast rate. However the literacy in the last decade is emphasized through the eradication of the illiteracy. Though in some places like Belphari people still starve today and have malnutrition. New venture has been adopted by the Government to fulfill the national objective of sending all children between 6-14yrs to school by 2010. There are a bunch of primary and high school. Recently the district is making progress in the field of vocational training. 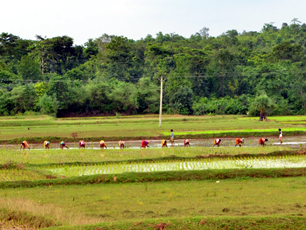 Jhargram is beautiful for its green forest, tourism, ethnic group and folk & tribal culture. There is peaceful co-existence of Sabar, Lodha, Santal, Munda, Birhore like aboriginals. Their festivals, rite & rituals and colourful songs & dances are rare of the rarest of Bengal as well as India. So Jhargram is called the golden treasury of folk & tribal culture.

In addition of being a confluence of Vaishnav, Shakta & Shaiva culture, Jhargram villages also observes the worship of "gramadevata" or the god of village popularly known as the Garam Thakur - symbolized by burnt clay model of elephants & horses, laterite stone under old Sal, Mahul, Karam trees. The shrines of village Gods is called ‘Garam Than’. The inhabitants belonging to S.T./S.C.. Communities express their silent devotion to the village Gods. The annual worship of these deities in Makar Sankranti, Chaitra Sankranti, 1st day of Magha (popularly known as Aikhan) is the best village festivals of Jhargram.

In spite of being an important tourist center and a prosperous economy based on agriculture, the standard of living in the district in comparison to the other parts of Bengal is substantially very low. Recently Government has adopted measures and insisted on the educational & economic developments of the district. 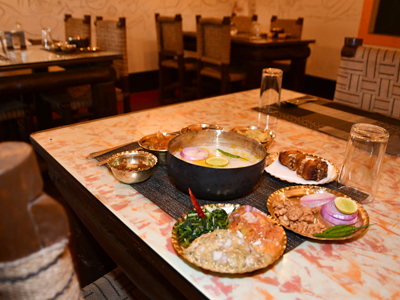 Panta Bhat (Bengali: Panta Bhat; Assamese: Poita Bhat or Ponta Bhat; Odia: Pakhala) is rice-based dish prepared by soaking rice, generally leftover, in water overnight. Traditionally served in the morning with salt, onion, chili and Bengali style mashed potatoes or "Aloo sheddho" (simple boilled potatoes mashed and salted without adding any cream or cheese). It is consumed in eastern Indian states of Odisha, West Bengal, Jharkhand, Assam and Tripura. It is a popular dish on the day of Bengali New Year (Poila Baishakh). It has been described in documents from 17th century. Panta bhat has more micronutrients than fresh rice. It is traditionally considered as beneficial in feverish conditions.

There are many variations of the dish though all are made by soaking cooked rice in water overnight. Rice is boiled the usual way. Then phaen or starch is strained away. Rice is cooled in air temperature for 3-4 hours. Then cool water is added in a way that about an inch of water rises above the rice. Rice is generally covered with a light piece of fabric. 12-24 hours later panta bhat is ready. Panta bhat retains its taste for 2/3 days. The fluid portion is called amani or torani, and may be specially prepared. Care must be taken to cover the dish during the long soaking to avoid contamination.

Panta bhat is especially popular in rural areas, generally served with salt, raw onion and green chili. It is usually served as breakfast, though noon or evening consumption is not uncommon. Panta bhat and other low nutrition food are consumed as fillers between meals. Panta bhat is one of the cool dishes popular in Bengal, meaning it helps keep cool during the summer. This cold and wet food, is suitable for summer mornings. 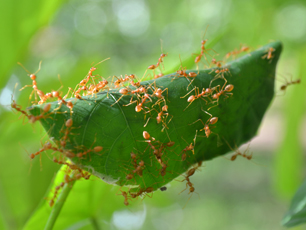 They are small, coppery-brown in colour especially around the head and body with a darker abdomen. They come at a variety of sizes within a single nest, ranging from two mm to six mm and have nests with no obvious entry or exit holes on top of them. And they are known for their particularly aggressive behaviour. One may be a victim of their attack if he just happens to be near the vicinity of the nest. And their sting is extremely painful and leaves a burning sensation. Yes, it is the red ant that we are talking about.

After collecting the nests from morning to noon, Munda separates the eggs, larvae and pupa, from them and transfers these into a bucket. The bucket is then handed over to his wife, who sells these in our village market at the rate of Rs. 2 per 'dona'.

If one wonders what happens with the eggs of the dreaded insects' they are eaten by many residents or are often used for as cure for many ailments. The red ants are called Hawoo in Mundari and Kurkut in Santhali. They are also called Beboot in Panchpargana area, and are considered a part of the diet especially of those who are infirm. As a regular seller of the ant products stresses, 'Yeh bahut garam hota hai.' (They make the body warm). They describes them as 'tasty' when fried with onion and slightly 'sour' and 'creamy' and the villagers believe ant products are very effective to regain strength after prolonged illnesses like typhoid, flu and fever.

Local people who cannot afford a regular protein diet often consume adult ants in form of a chutney. For the chutney, ants are mashed with salt, red chillies and mustard oil and is eaten with botha bhat or stale rice.

The red ants are social creatures who often construct very large nests. The neat nest is built on fresh leaves glued together by a fluid secreted from the larval glands. Workers, or the sterile wingless females, carry out all the daily chores within the nest. After mating queens break off their wings and establish a new nest without the help of a male, who normally die. Each queen may lay many eggs for several years. Most larvae develop into workers. Red ants are omnivorous and eat plant materials and small insects. They can not consume solid food, and liquefy the food source.

The red ants do not have a stinger, but inflict a painful bite, which is aggravated by irritating chemicals (formic acids) that is secreted from their abdomen. 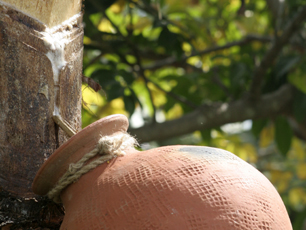 Sweet date palm juice and molasses are one of the most awaited products of winter in Jangal Mahal. During winters a group of people, known as "gachhi", employ themselves to extract the juice from date palm trees. A gachhi cuts a part of a date palm tree and then fixes a bamboo pipe there to collect juice. The juice flows through the pipe into an earthen pot throughout the night and is collected the next morning. The juice is either sold raw or molasses is prepared from it.

A date palm tree gives us juice, cooking materials, molasses and moulded blocks of jaggery, date palm trees grow abundantly in Jhargram district due to it's favorable soil and climate. Juice extraction continues till the end of the winter season which keeps the rural economy vibrant. 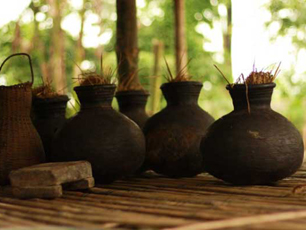 In Bengal the tribes make a fermented drink resembling to beer from rice. The tribes of Jhargram commonly consume Pachwai prepared from rice and other grains. It is brewed much in the same manner as English ale, the taste is said to be similar to that of ale and is in considerable repute in Bengal.

The starter for Pachwai is bakhar. The bakhar contains Rizopus sp, a type of yeast used for fermentation. Ginger and other plant materials are dried, grounded and added to rice flour. Pachwai is manufactured by adding bakhar to steamed rice and allowing the mixture to ferment for several days. The whole mass is then transferred to earthen jars, water is added and fermentation continues. The beer develops a characteristic alcohol flavor and is ready to drink in 1 or 2 days.