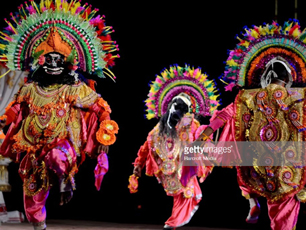 Folk arts and crafts occupied a conspicuous position in the life of the rural people of Bengal. Though customs, beliefs and rituals varied widely, traditional story-telling, dancing, singing, festivities and ceremonies along with processions and social gatherings were universally prevalent. Folk Culture of West Bengal reflects the rich cultural heritage of the state.

The numerous tribes and ethnic groups of Bengal have their own distinctive folk arts, as varied and beautiful as the tribes themselves. The different folk dances of this state are well-known for their flavor and beauty. Each and every region of West Bengal bears something distinct to exhibit. Songs & Dances are a part of tribal lifestyle. As a traditional art form, folk dances of Bengal have gained immense popularity and recognition over the years. The dances contain themes that range from ritualistic to satirical and from allegorical to social. They involve prayers, offerings, celebrations and odes. Usually performed during festive seasons, or to mark an occasion, these dances ingrained in folk culture, reflect local faith, tradition and custom. Folk dances in this state were initially either devotional or agricultural. Jhargram is the golden treasury of tribal dances spread over the eight blocks of the district. Some of these tribal dances are on the verge of extinction. Langre, Sarpa, Dangrey, Saharul, Bhuyang, Chang, Mundari, Ranpa, Tusu, Bhadu, Jhumur, Baul, Kirtan, Parab Nach, Patanach, Kathinach, Manasa Mangal, Shitala Mangal etc. is not only a mere experience of some masterpiece of human creative art, but a fascinating adventure through essential dimensions of a civilization, its collective priorities, the skills of their implementation and the philosophies that inform them. To revive and showcase the different folk Culture and folk forms of Bengal, a unique project entitled Lok Prasar Prakalpa has spread its wings across the State. Parva Dance is one of important tribal dances of Jhargram District which revived by Government of West Bengal under Information & Cultural Affairs Department. It has come to know that the “Piyeks” of ‘Chilkigarh Raja’ use to performed this dance in the evening for the entertainment of royal family. The masks used in this dance form were made up of a single wooden block which is very much different from the masks of traditional ‘Chhou’ dance. 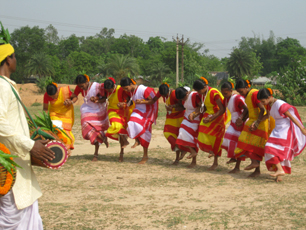 This is a war dance for the hunters. Only the male takes part before they go for hunting. The youth with all their vigor show their heroic attitude. Instruments like madals, dhamsas are used, and arms like bows arrows, tangi are used in a regular basis. 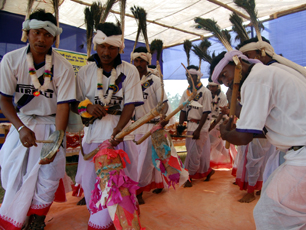 It is one of the most popular dances of the tribals. This dance is celebrated on the auspicious day of Vijaya Dashami during the Durga Puja. This is only danced by the male members of the clan. There is a belief that the artists will be wearing dhuties upto knee, napkin around waist, red tape in unpolished hair, and feathers of peacock tucked on head, dance from day till night. The extraordinary musical instrument is made of pumpkin. 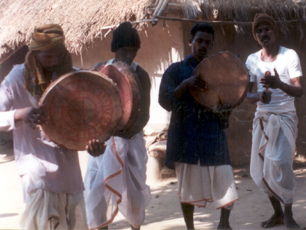 Deep in the forest and far away from the hunting tribe - Lodha Sabars reside. The forest is their heavenly abode, and their only dance is Chang. It is held during festivals, marriage, at times in funerals also. An instrument called "Changu" like daffli is made from Karat tree is played during the dance. Five to seven of the male artists dance from eve till the mid night. This dance is not very popular to the greater world. Due to rapid economic development and urban culture these tribes and dances are always subdued. Though it is still found in the jungles of Jhargram, being civilized these is our part to preserve the culture of tribal dance. 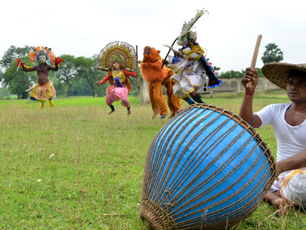 The dance is performed by male dancers with masks from the people from local communities like the Mundas, Mahatos and Kurmis. It is performed at night in an open space, callejd akhada or asar, to traditional and folk music, played on the reed pipes mohuri and shehnai. A variety of drums accompany the music ensemble including the dhol (a cylindrical drum), dhumsa (a large kettle drum) and kharka or chad-chadi. The themes for these dances include local legendsj, folklore and episodes from the Ramayana and Mahabharata and other abstract themes.This dance originally belongs to the neighboring district of Purulia. 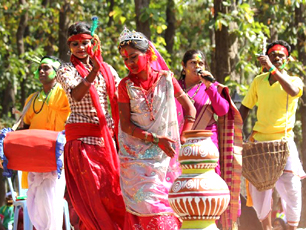 It has a special gharana as it descends from Chotanagpur Plateau. The dance is mostly performed in open places (now-a-days in cultural gatherings also). The male members wear long traditional dresses and keep the rhythm with few traditional instruments generally a drum, hung on shoulder; a flute and a pair of "Taal" (two metallic discs). The girls mostly perform the dancing part, holding each other's waist and movnig hands and legs forward and backward synchronously. The lyrics of Jhumur are built on day-to-day languages and mostly depict love and or pleasures and pains of day-to-day life. 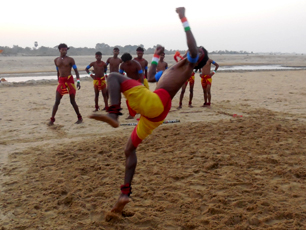 Raibenshe is a genre of Indian folk martial dance performed by male only. This genre of dance was once very popular in West Bengal. Presently, it is performed mostly in Murshidabad, Birbhum, Bardhaman and Medinipur districts. Traditionally, this dance involves vigorous and manly movements of the body along with the acrobatics of a raibansh (a long bamboo stick), from which its name originated. During the performance, the performers enact the actions of drawing a bow, throwing a spear and waving a sword. The performers wear a brass anklet (nupur) on their right ankle. This dance is accompanied by dhols (drums) and Kanshis (cymbals). This dance was traditionally performed by Bagdi community, who worked as the bodyguards of the landlords in medieval Bengal. 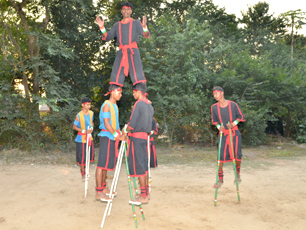 This is typical dance of the Mundari clan. Only the male artists take part in this dance and have to work hard during the dance. The artists stands up on a ladder to dance and have chances of falling down if they lose their concentration. These artists are young and wear dhuties, red napkins, red tape on the forehead, stalking on feet. Musical instruments used here are madal and dhamsas.

In the local dialect Panta means group. Both male and female take part in the folk dance. This dance is of the aboriginals of Bhumij tribe.